In this article, what I want to show you is the import of financial leases, if you are familiar with the financial leases module, you will have noticed that there is a menu item Lease import framework > Import header, but… How does the data get to that form? Let’s see it.

In this example, they are going to be imported through an Excel file, using the tools we have in Microsoft Dynamics 365 Finance.

The first thing would be to configure the module, if you have any doubts, do not hesitate to consult the Financial Leases Course in El Rincón Dynamics, the points to be configured would be:

In the following table, all the entities with which the leasing module works are listed, those marked in yellow would require manual action.

From the System Administration Model, within Data Administration, of these 16 entities, the Parent leases entity could be used to create the template and import data. The disadvantage of using this template is that it would not generate the multi-asset line, nor the expense lines, and it would not be valid to make modifications or adjustments to the leases already created in D365 Finance, therefore, the entities that are going to be used are:

The first thing to do is to create an export project to obtain the Excel files that will serve as a loading template. To do this, from Data Administration, we generate an export for the three entities that interest us, in this example, when choosing the fields, we select “Importable fields“.

This process generates the three Excel files in which the data for the import are to be filled in.

In the Lease Staging template, the following must be considered:

Mandatory fields: will be used to perform the classification of the lease and calculate its current value, which will serve as the initial amount to start depreciating.

•  LEASEID: Lease code, if it follows a numerical sequence, it must be considered, so that they are correlative and modify the numerical sequence manually, to give the next number to the last one imported.
Note: The sequence indicated in the file is imported, this can also be used to differentiate between imported and manually created leases.
•  IMPORTID: Identifying code, to link the lease with the multivalences and the expenses, e.g., ERD0001, ERD0002…
•  BOOKTABLEBOOKTYPE: Id. of the book created in the configuration of the module
•  BORROWINGRATE: Monthly interest rate
•  COMMENCEMENTDATE: Start date of the lease, it is also advisable to put it in the LEASESTARTDATE column, so that it does not give an error, if the multivenues are imported.
•  CURRENCYCODE: ISO currency code
•  FAIRVALUEOFASSET: Fair value of the asset
•  LEASEGROUP: Asset group created in the module configuration
•  LEGALENTITY: Company code
•  MONTHSOFUSEFULLIFE: Lifetime in months

In addition to the mandatory fields, it is advisable to fill in other fields, such as the type of annuity or the description.

It is very important to fill in the IMPORTPROCESSTYPE column, as without this data, the import will fail. The values that this column can take are:

This already gives us a clue, that through this import, it will be possible to create new leases, update or create adjustments of those that are already registered.

The other two templates do not have any difficulty, just put the same import ID.

The import project is generated.

Once the data has been imported, it can be validated in the intermediate table, but from here, unlike other imports, it will not be possible to bring it into the final tables yet.

Once this process has been generated, go to the Financial Leases module > Header import framework > Import header. From here we select the import and consult the intermediate storage data.

In this form, you can have several cases, that it is a new lease, or that it is an update, or adjustment of an existing lease, in these cases, the options of the “Compare and iew report” button and the “See differences” button are activated. This will show what is currently registered in D365 Finance, with what has been read from the Excel file, if here it is found that there is some data wrong, for example, the period that in the Excel comes as Yearly, but in reality is Monthly, it can be corrected and updated, through the “Update stage data” button.

In the imports of leases that have already been registered, there are certain data, such as, for example, the lease start date, that cannot be modified. 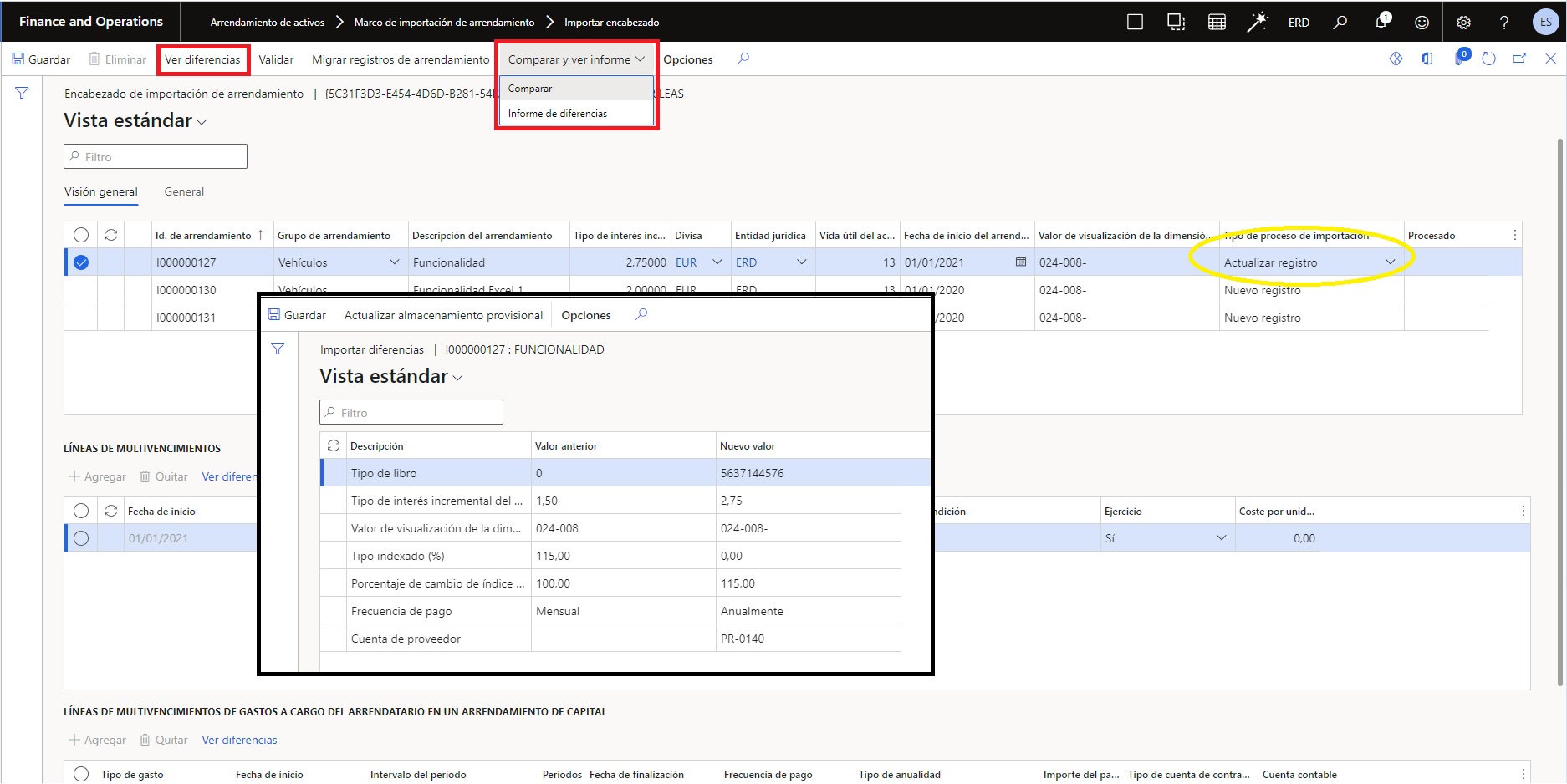 The “Validate” button will generate a check, that all data are correct for the import, this can be done for the selected lease, or for all leases. 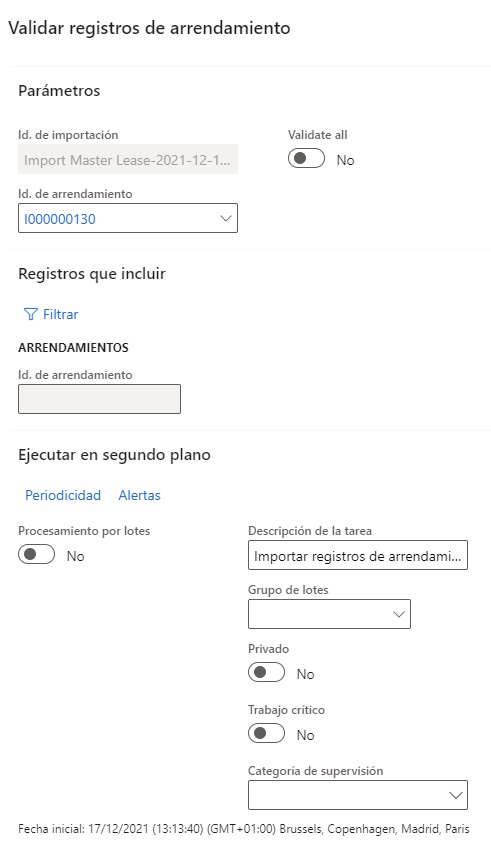 Let’s note that in the multivenue lines, we have 13 periods, but the end date is not correct:

When validating this lease, the system displays the error:

In order to consult these errors, we have to go to Asset leasing > Inquiries and reports > Import error log.

Tip: if you get a period error, refresh the “Period interval” and “Payment frequency” fields of the payment schedule lines.

Once validated, they could be imported by clicking on “Migrate lease records”. 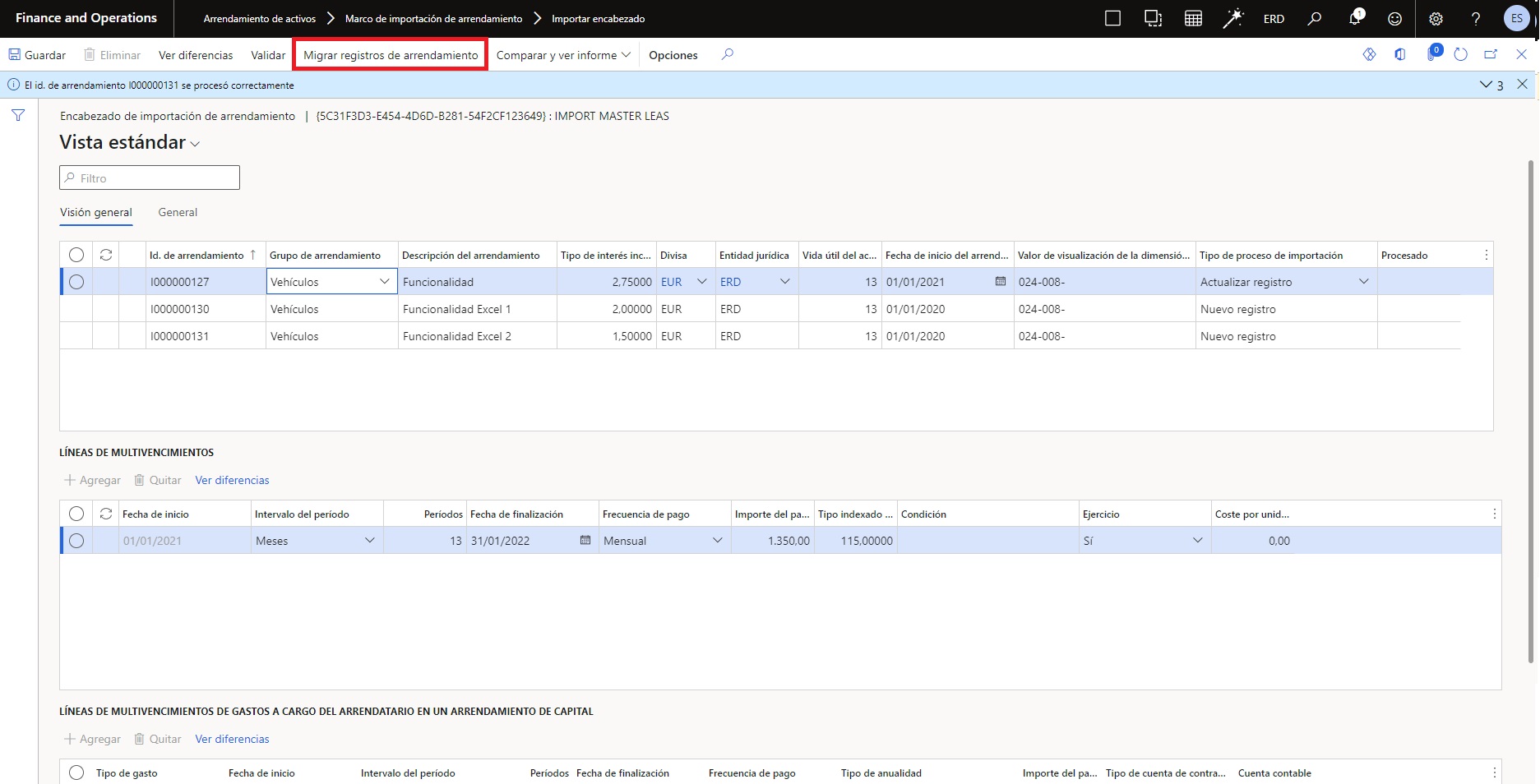 This process, as with validation, can be done for the selected lease, or for the whole lease. Once imported, the “Processed” checkbox is automatically ticked.

It should be borne in mind that importing leases in “Not yet acquired” status means that the leasing process should be initialised, starting with confirming the forecast of periodic payments, to generate the initial recognition and thus be able to start with the depreciation of assets and liabilities.

In the case of adjustments, you would have to generate the schedule and confirm it in the same way.

That’s all, I hope this information will help you when importing your leasing contracts. 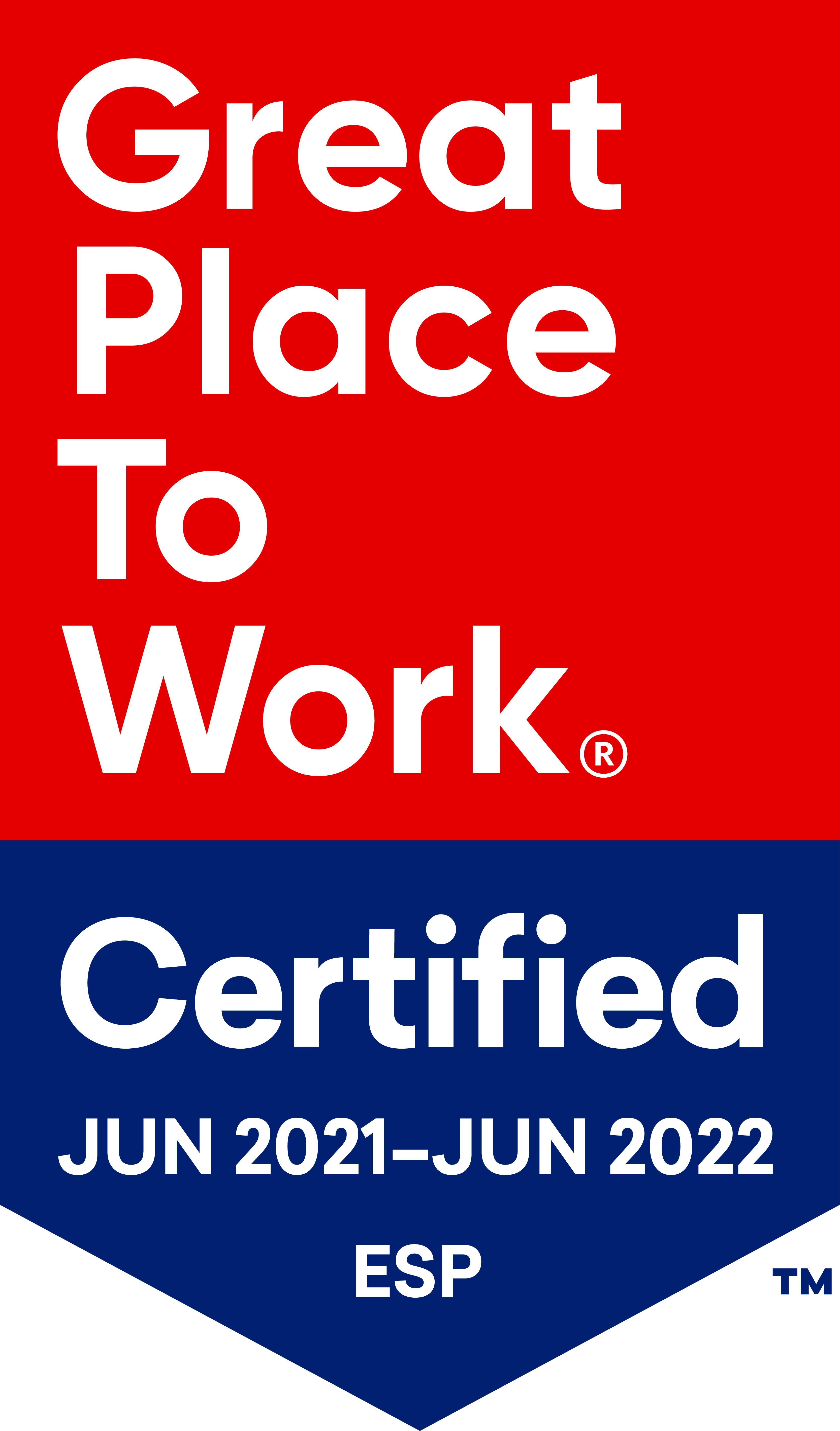 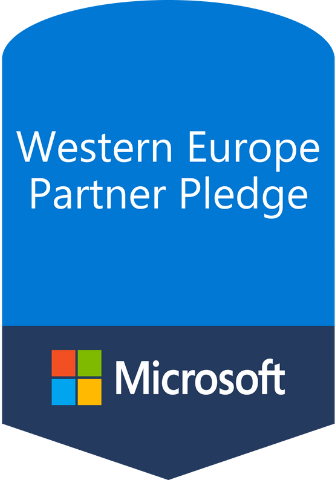